In the Karakorum, a group of rock towers showcase some of the tallest cliffs in the world. Located between Trango Glacier and Dunge Glacier, Trango Towers attract those looking to challenge themselves. The high degree of difficulty led to some spectacular climbs.

The unnamed tower is a huge, pointed spire that juts out 1,000m from the ridge line. It was first climbed in 1976 by the British Joe Brown, Mo Anthoine, Martin Boysen and Malcolm Howells, via the southwest face. 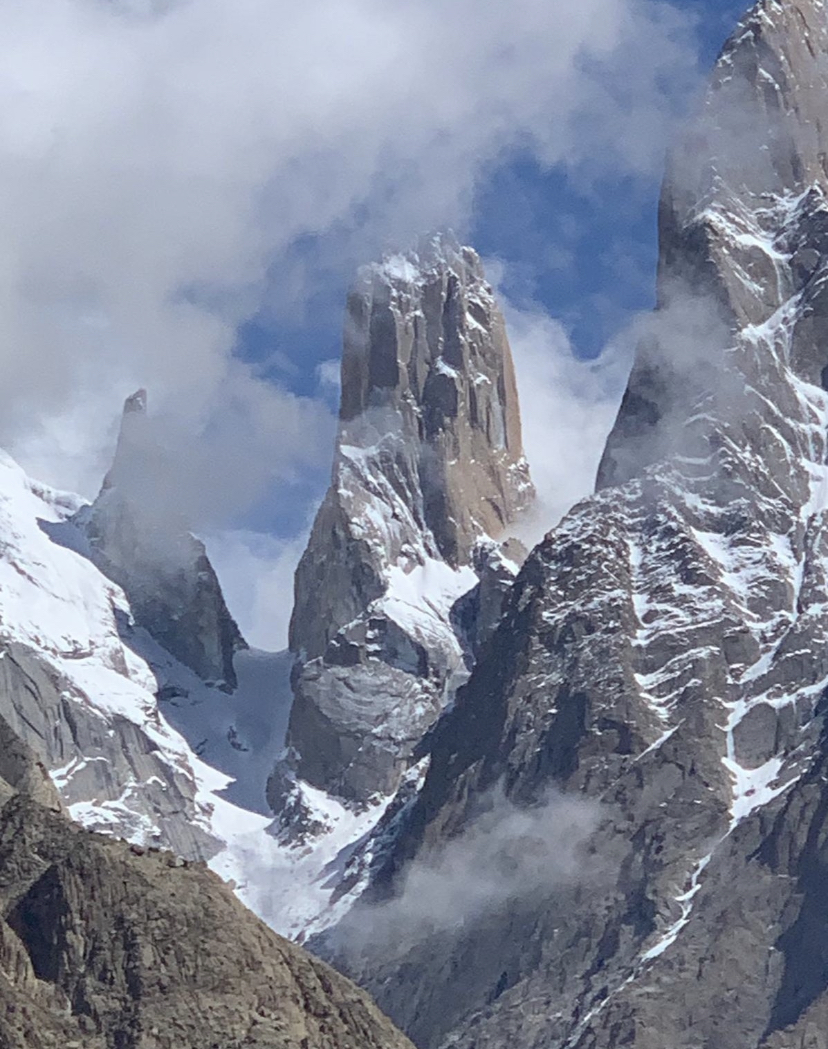 Unnamed tour, view from the trail to the K2 base camp. Photo: Madison Mountaineering

These Brits were a peculiar gang, more terrible children than today’s professional athletes. But their achievement is notable. Some consider it the first expedition to transfer the big wall style to a big mountain. 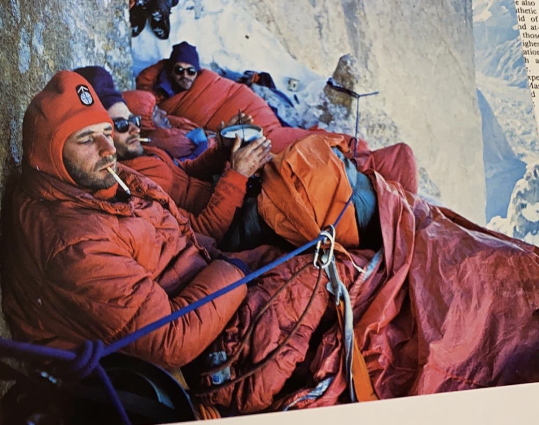 British mountaineers on The Nameless Tower in 1976. Photo: Jim Curran

The climbers were joined by mountaineering cameraman Tony Riley and writer Jim Curran. Curran wrote a book about their adventure, Trango: the unnamed tower.

The Norwegian East Face 1984 route is one of the most thrilling and tragic stories in rock climbing history. It is an elegant and direct route over 1,500 m of smooth granite. Hans Christian Doseth, Stein Aaheim, Finn Daehli and Dag Kolsrud set out to climb the tower after a photo of the impressive wall appeared in Mountain Magazine in 1983. 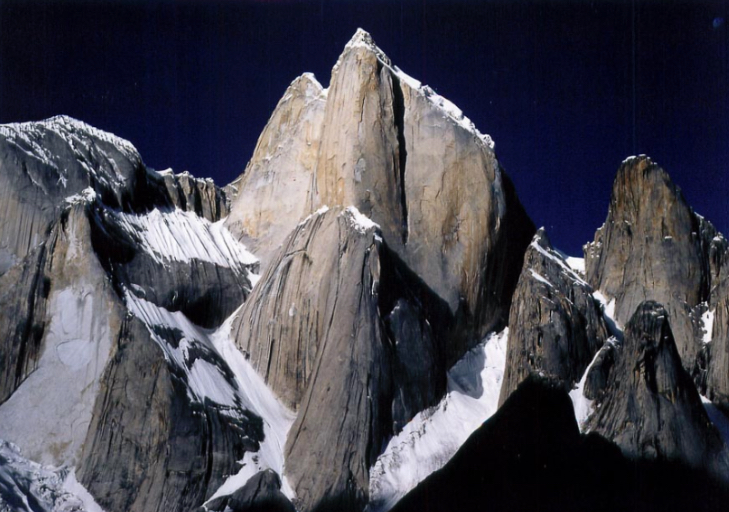 Due to the bad weather, the four Norwegians took a long time to resolve the lower part of the wall. They were pushing their limits. Some locations involved climbing over a precarious rock that barely supported their body weight. But the Norwegians knew that the greatest difficulties awaited them on the top 500m of the course.

The slow climb meant they were running out of food. Collectively, they decided that Aaheim and Kolsrud would only do 90% of the route and then come back down. Doseth and Daehli would continue to the top. 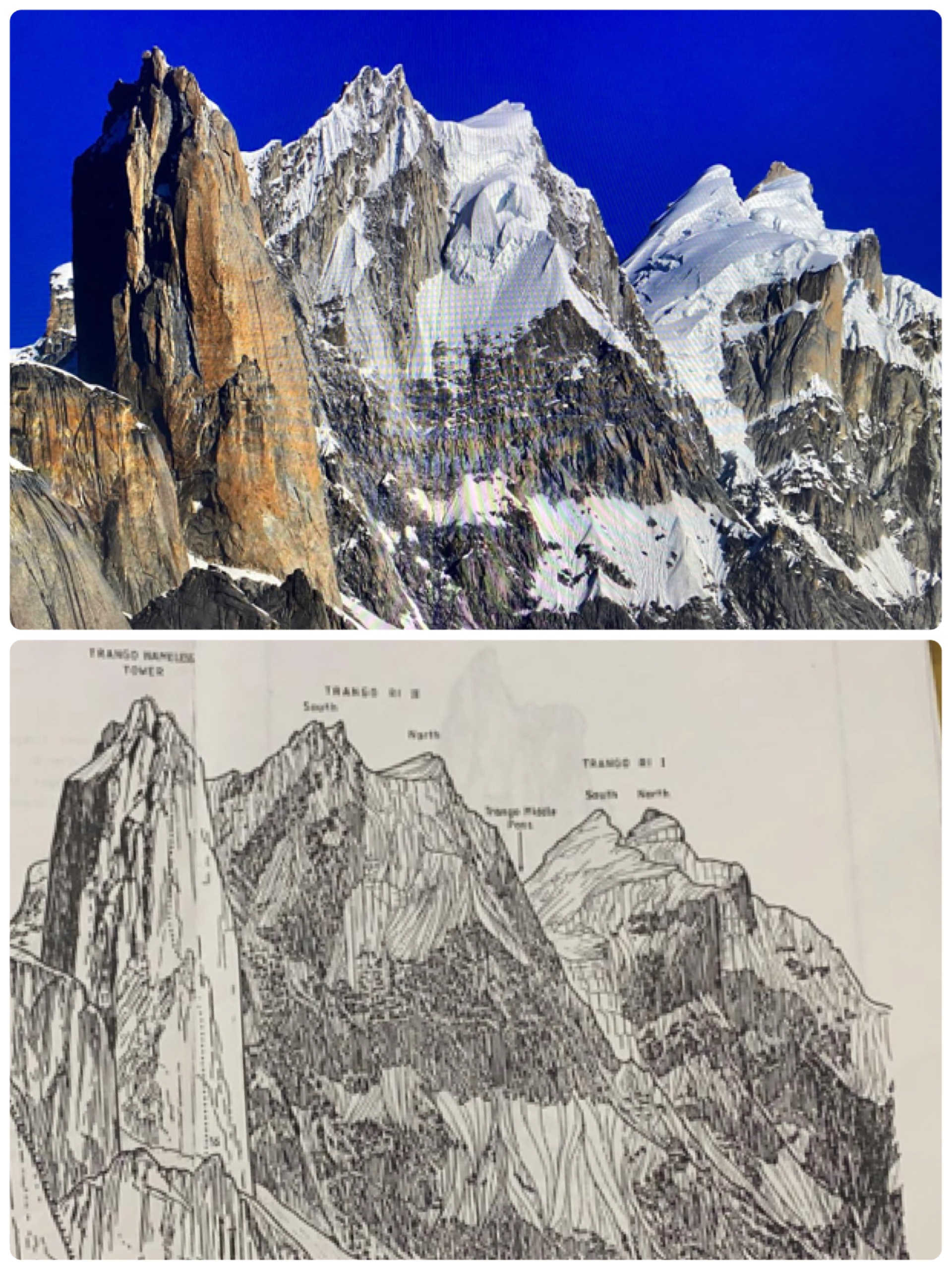 The towers photographed by Sebastian Alvaro, from the same location as Jan Kielkowski sketched them. Photo: SÃ©bastien Allvaro

The road of no return

Aaheim and Kolsrud returned to base camp. From there, they watched Doseth and Daehli reach the top. But on the descent, the couple disappeared behind a rock face. Days passed and there was no sign of the two Norwegians.

Three weeks later, a Pakistani helicopter arrived and located the two bodies lying in the snow. Bad weather prevented him from collecting the bodies. It is not known what happened to Doseth and Daehli. An avalanche could have torn them from the wall, or they could have become detached from an anchor, causing a fall of more than 1,500 m. Since their tragic descent, this road has been called “The Road of No Return”. 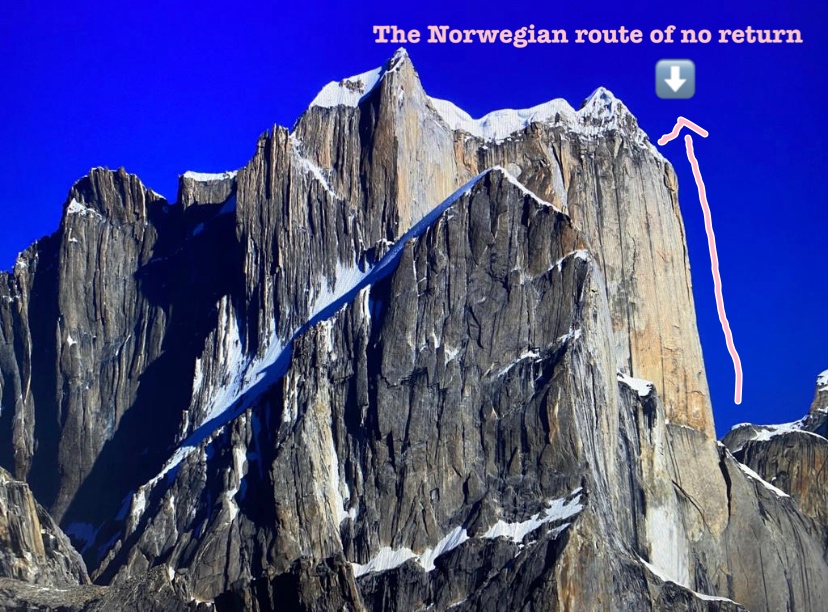 Great Trango tower, south wall. The Norwegian road is signposted on the right.

Then in June 1990, the Japanese climbing team Trango, led by Takeyasu Minamiura, arrived at the foot of the Great Trango Tower.

The Minamiura team consisted of Masanori Hoshina, Satoshi Kimoto, Masahiro Kosaka, Takaaki Sasakura and Yoshitaro Arisaka. They intended to climb the 6,286m Great Trango Tower via the Northeast Pillar, a variant of the 1984 Norwegian route from the east face.

Climbers started out in capsule style, climbing section after section, taking all of their gear and food with them. Initially, they went up to the right of the Norwegian road. Later, on the upper part, they joined the Norwegian road.

On August 17, after 25 days of climbing, only a few lengths separated them from the summit. So close, but they still had to interrupt the push from the summit. They had invested a lot of effort in this mythical road but they understood that it was time to go down to base camp.

Solo ascent of the unnamed tower by Minamiura

However, 33-year-old expedition leader Minamiura had another climb in mind. He chose to solo the east face of the unnamed tower. He started on a route to the right of the 1988 Kurtyka-Loretan route and planned to paraglide down from the summit.

After 40 days of climbing, Minamiura reached the top. Write for Mountaineer in 2005, climber Greg Child described the climb: [Mark] Wilford and I started in 1989.

At the top, Minamiura collected her things: the little food she had left, and her bivouac equipment. He tied them to a small paraglider and launched himself over Dunge Glacier, over 1,800m below him.

He only needed 10 minutes of suitable wind for his flight, but his exit from the rock failed. His parachute hit the wall and crashed. Fortunately, his ice ax was stuck to his back, which prevented him from breaking his spine when he hit the wall. 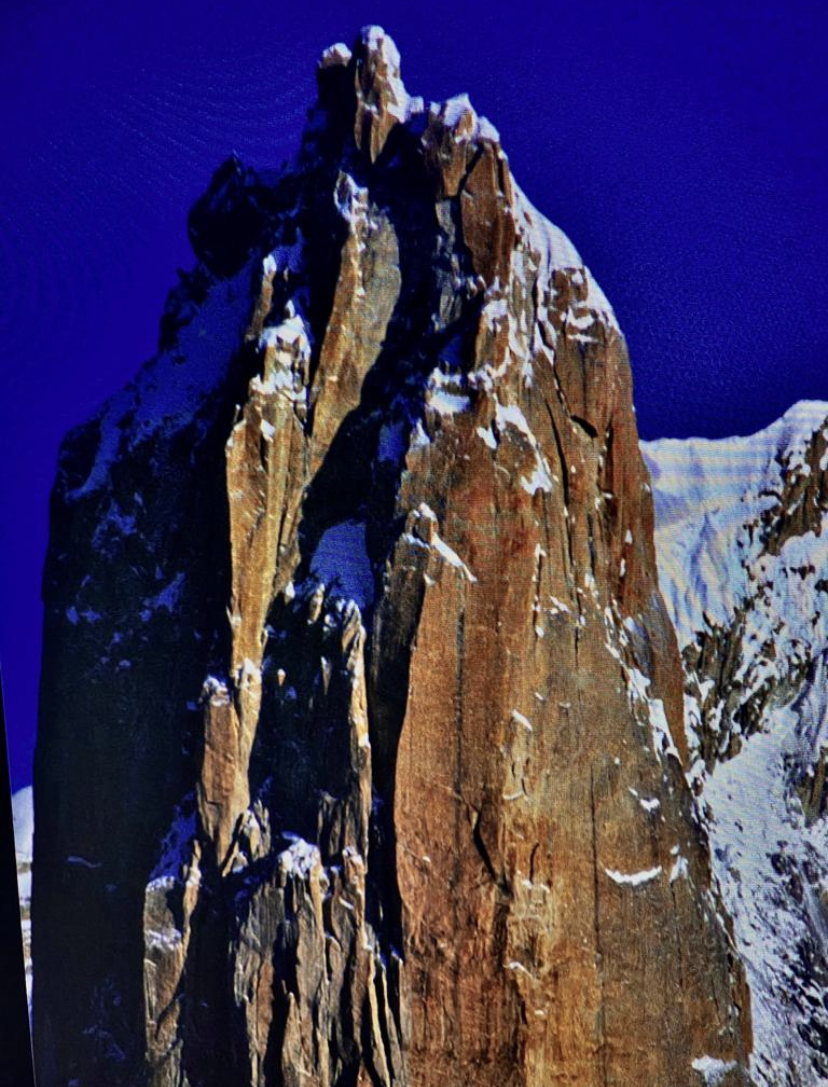 Although it was windy during the day, Minamiura had to wait for the wind to pick up before she could jump.

Eighty meters below the summit, he suspended from his paraglider above the abyss. Minamiura remained calm, took the radio out of her pocket and called her companions at base camp. Minamiura said he had been in an accident and needed a helicopter if possible.

Kimoto and Hoshina walked to the Pakistani army helipad in Payu. Meanwhile, Minamiura spent the whole night clinging to her paraglider at 6000m. The next morning he managed to free himself and reach a small, narrow ledge where he would spend the next six days.

The helicopter finally arrived but was unable to stabilize at 6000 m due to crosswinds. Minamiura learned that helicopter rescue was impossible.

Improvisation and resumption of the first course

Kimoto and Hoshino had to come up with another plan. They asked the pilot to take them from Dunge Glacier to Trango Glacier, which is the opposite side of the tower that Minamiura was trapped on. From there, Kimoto and Hoshino would scale the original British road to the unnamed tower. The route had not been repeated since.

Meanwhile, Minamiura lacked clothing, food, and protection on the rock ledge. At night, he rolled up in his paraglider and rubbed his legs so as not to freeze.

While his two companions scaled old frayed ropes, the Pakistani helicopter attempted to drop food for Minamiura, but the food fell into the void. A few days later, the pilot tried another drop of food, again without success.

But a piece of cheese had stuck between rocks above Minamiura. Minamiura decided to take a chance and climb to reach it. It was a very risky climb but he did it.

The next day, after three days of risky climbing, Hoshina and Kimoto completed the British route, reached the summit, and rappelled back down to Minamiura. The three climbers continued their descent along the Yugoslav Way. Two days later, they arrived safe and sound at base camp. 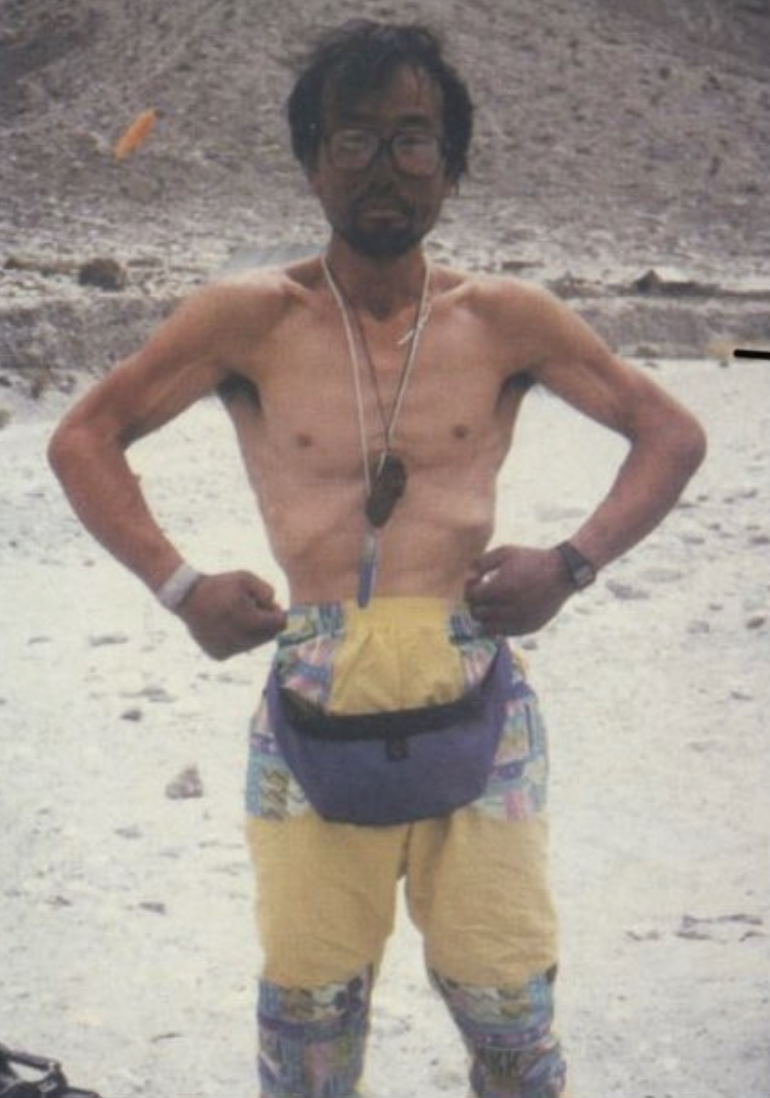 It is an incredible story of commitment, camaraderie, survival and solidarity. Minamiura opened up a new solo route, and thanks to the Pakistani helicopter, his two companions, and perhaps a luckily stuck piece of cheese, he survived to tell the tale.

@KrisAnnapurna reports on outdoor activities, ongoing expeditions and stories related to the history of mountaineering in Karakorum, Himalayas, Tien Shan and other ranges.