It was a windy night, intermittently, on the desert hill. Windy enough to blow my tent pegs when they weren’t reinforced with rocks at each corner. I kept my tent open so the wind could roll through the mesh, instead of pushing against the solid fly and shaking the tent all night.

The scenery reminded me a lot of a place where I had heard a cougar, back on the PCT. I tried not to think about it, but cougar sightings remain one of my main concerns. I kept waking up and listening intently, then falling asleep again for a while. I had forgotten that anxious and useless vigilance that keeps me awake some nights here, especially when I am camping alone. This should subside within a few weeks.

I woke up to a pretty dawn, birds were chirping all over the hill. Mountains outlined in pink and blue with the sun rising behind them. All this vast landscape in front of me, the sandy basin below.

As I was packing, two hikers I had seen before walked past me and shouted hello. It was good to know they would be nearby.

As pretty as the sunrise was, I felt a sense of urgency seeing the rays of the sun, feeling the warmth of even those softer first rays. It was only a matter of time before the earth cooked again. 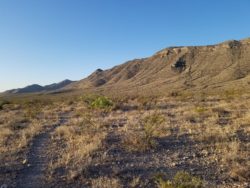 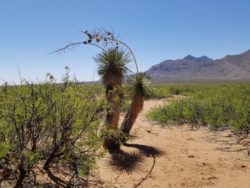 Morning hike was beautiful, windy, in soft light. The hike was unlike anything I had done before, winding from hill to hill with small ravines in between. I had read time and again about how easy it is to “get lost” on this trail, a seasoned hiker just told me yesterday, “You are going to lose the trail all the time”. It was hard to imagine, without seeing it, but now everything was becoming clear. I was walking on dirt sparse with creosote, mugwort, ocotillos. The hills lacked vegetation to clearly mark a path. On top of that, cow paths often crisscrossed the hiking trail, further blurring its boundaries.

What an adventure. Most of the hillsides had a trail marker, a wooden post with a rock on top, to aim for. The trail was well defined by this post, then went off after that at times, and I often couldn’t see the next post. If I had hiked with someone, I probably wouldn’t be able to say why I chose to walk a certain way, following a slight trail cue or the natural curve of the landscape, but sometimes , intuitively, it felt right to go in a certain direction, finding the path and the next post as I went. When intuition failed, I pulled out my phone and pulled out my map, altering my route accordingly.

My progress was slow (7 miles in 6 hours!) due to the winding route, but the hike was also more engaging, testing observation skills.

I loved not having a path, rather a direction. Being here sometimes feels like multiple acts of surrender – my mind and anxieties about wildlife let go enough to fall asleep, and later embrace the freedom of having multiple paths to choose from.

I paused under one of the few trees to be found, then continued on, descending to the desert floor and beginning a long hot hike of waterless miles to the cache of water in front of us. . I didn’t pass this one, partly due to the winding nature of the section of trail behind me – it took longer to cover those miles than expected. Nothing worse than a few thirsty miles, thankfully.

The water cache was a metal trash can filled with large, durable water containers, provided by CDTC and a kind volunteer who runs Hachita’s general store. I’m told he runs to several caches and fills them daily, for a while. So far it’s saved me from trying to herd in cattle troughs here. I am grateful. The longer I can delay this, the better.

I sat down in the thin ribbon of the water cache to eat a snack. The 6″ ribbon of shade was a treasure, in a landscape of Joshua trees, yucca, parched grasses and sagebrush, and the sun was baking all above. 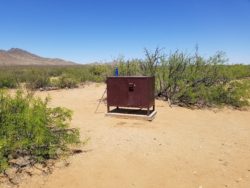 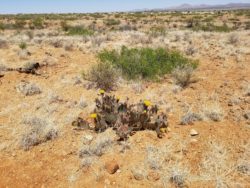 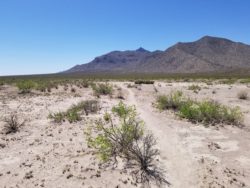 To make up for that last bit of dry hiking, I drank until I couldn’t and filled every container I had, for the next 10 miles. I walked away thinking of my PCT friend who had ended up riding a camel to a water source last year. When I laughed at him moaning and asked him how he was feeling, he replied, “Like a good friend I’ve missed has climbed on my back again.” Nice creaky apt-pack, heavy steps.

I passed the two hikers I had met earlier, sitting in the shade of a sign indicating the start of the trail. They offered me a spot – a considerate gesture, considering the shaded patch was about 6×4′.

I kept walking thinking that if anyone asked me about hiking this trail I would tell them to hike the PCT first. I’m happy to face this New Mexico desert, with the whole California desert hiking experience on my mind. Protect yourself from the sun all the time, find shady areas to rest, estimate the quantities of water to carry, go back to the sources. I guess you could learn it here, but the stakes seem higher. Saw a total of two other northbound hikers all day (and 2 southbound). Autonomy is essential.

All day I turned to look at Hachita Peak, where I came from, and marveled at how different it looked, from the distance. Massive. It’s often satisfying to have a reference point like that to look back on, to think about how it felt earlier in the day, to be there (!) and there ( !), and putting it all together up to this point now. 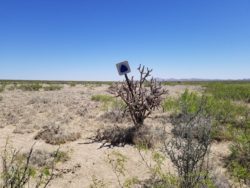 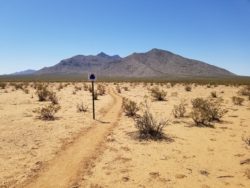 At the end of the day, after some hot hiking and crawling through shady huts to recover, I made my way to a magic cooler that Radar, the general store owner, had provided with electrolyte drinks in ice water. The other two hikers came up after me and we ate together, camped nearby.

One is a veteran hiker (his third time on the CDT!) who said he’d hiked all three trails (Appalachian, Pacific Crest, Continental Divide), completed his triple crown 10 years ago, thought this would be all, but somehow, “kept coming back to it” and “here I am now”. These stories are always both admirable and disturbing to me. If you really love hiking and all the best it has to offer, can you make peace with a hiking conclusion, potentially not again? Is time spent hiking repeatedly well spent?

The other hiker was also completely addicted to long distance hiking, saying, in response to how’s it going for you so far? “Love it! I already know I want to come back next year and do this hike again!”

So here we are camping in the NM desert under the stars, after a hard day of hiking. I’m grateful to have met these two hikers, to be here now, for my family/friends back home, and the attraction continues between the two places.