AT HOME IN Jackson, Wyoming, Jimmy Chin can go out and run, ruck or climb Grand Teton. But these days, the professional climber turned Oscar-winning filmmaker (and father) is often on the road. Chin’s solution: go to the nearest climbing gym. Today, he’s at the Vital Climbing Gym in Brooklyn and has 90 minutes to train before a day of meetings and promotion that culminates in an 8:00 p.m. showing of his new show, Edge of the Unknown with Jimmy Chinat the Central Park Conservancy Film Festival.

Chin will usually jump rope for a 15-minute warm-up. “Then I’ll do an easy climb for 15 minutes, then increase the difficulty for about an hour,” he says.

Right now, Chin is six feet in the air in the gym, hanging from a rock. After sweating a little with the jump rope, he scales the wall without a harness. He glances at the photographer and adjusts his position. Then he jumps up and walks over to the photographer to look at the screen. Chin suggests changing places in the gymnasium to find better lighting. He’s also working his creative muscles today.

“My goal is to never lose shape. I strive to maintain 80% of my peak form so that I can improve it at any time to reach an elite level. Bouldering gyms have made my life so much easier,” Chin says. “Before, you had to drive somewhere and climb. With gyms like these, you can show up and climb for an hour.

Chin notes that he practically has to stay in shape to do what he loves; the consequence of releasing it could be a catastrophic injury. “Before, I spent ten hours a day climbing outside, and I could do it five days a week. Now, with time constraints, it is much more difficult. If you ask him to describe what he does, Chin is adamant about being a climber first, followed by a photographer, then a director. And yes, among adventurers, he is known for his ascent and descent on skis from Mount Everest in 2006. But the world is more interested in what he has done as a director. Chin won acclaim for the 2018 Oscar-winning documentary Free Solo, about Alex Honnold’s goal of climbing El Capitan without a harness. Chin’s new series on Disney+ tells pivotal stories about the world’s best extreme athletes and outdoor enthusiasts. 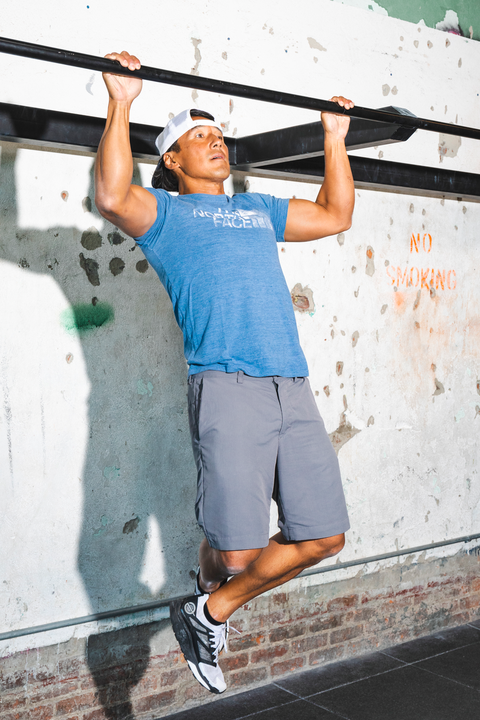 After more block reps, Chin is ready for something bigger. His right brain is focused on finding a tougher challenge, while his left brain wants better angles for photos. Chin settles on the roof wall of the gymnasium. For about 20 minutes it slides up and down and through the outside wall before stopping to review more shots. Chin notices that one of the video cameras has a lens that can capture a better view of Manhattan in the background. The change of objective is carried out. He just can’t stop directing.

With the rock shots nailed, Chin heads back down to practice. It starts with Turkish outfits, lying on your back with your left hand holding the kettlebell in the air. He methodically completes the holding steps, standing with the kettlebell before returning to his back. After two more kettlebell movements, he finishes with ring pull-ups.

Chin has been climbing for decades now, but he’s not slowing down. “In a pure climbing sense, I feel like I’ve climbed as hard as ever,” he says. With that, he left to shower and eat all day. 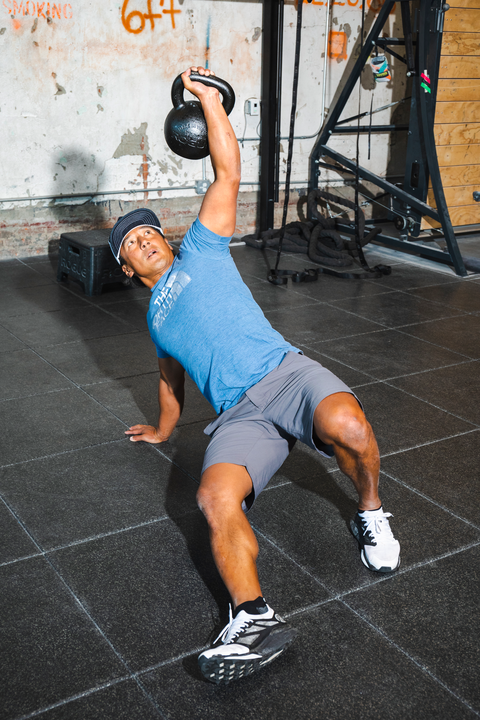 Chin builds the strength to climb with these 3 moves. Do each for 30 seconds, then rest 30 seconds; do 2 or 3 sets of each.

Build full-body strength and push your shoulders and core.

This classic leg builder also rocks your heart. Use a heavy kettlebell.

This story originally appeared in the November 2022 issue of Men’s Health.

John Thompson is the Equipment and Trade Editor at Men’s Health, where he covers fashion, grooming, equipment and technology. He was previously style and gear editor at BroBible.com and business writer for TheManual.com. His interests include buying rare vintage clothing and following his favorite baseball team, the Kansas City Royals.