by Maurice Isserman Continental Divide: A History of American Mountaineering is a scholarly tome that covers the exploits of mountaineers in the United States and Canada from colonial times to 1963, when an American team summited Everest.

Everest is a world away from the northeastern United States, the starting point of Isserman’s book. In 1642, Darby Field, a resident of present-day New Hampshire, climbed White Hill, known to local Indians as Agiocochook and to moderns as Mount Washington, the highest mountain in New England .

Others in the Massachusetts Bay Colony thought Field was stupid for climbing a mountain. It just wasn’t something people did. Isserman writes: “After his death in 1649, it was remarked that his life was ‘gay marred by folly'”.

Many people still think of mountaineers as a bit crazy for risking their lives for reasons that even climbers often struggle to articulate. French mountaineer Lionel Terray titled his memoirs (in English translation) Conquistadors of the Useless. Four years later, he died while climbing.

But are those of us who hike the high peaks of the Adirondacks so different from mountain climbers? We are drawn to the mountains to escape civilization, reconnect with nature, challenge ourselves physically, renew ourselves spiritually. Mountaineers seek the same things, even if they increase the challenge and the danger.

The Adirondacks play only a small role in Isserman’s story. He mentions that Lewis Evans, a surveyor, produced “A General Map of the Middle British Colonies in America” ​​in 1755 which contained an empty spot in the Adirondack region. The map read: “This country, on account of the mountain swamps and drowned lands, is impassable and uninhabited.”

The hostile terrain of the Adirondacks discouraged exploration by Europeans. “While tourists had been visiting the Catskills and White Mountains for several decades, the tallest mountains in New York State were still largely unknown and unvisited in the early 1830s,” says Isserman. 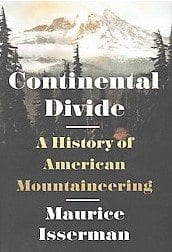 He identifies surveyor Charles Brodhead as the first European to venture into the High Peaks. In 1797 Brodhead crossed Giant Mountain and climbed, in part at least, another six 4,000 feet – “a formidable traverse even today, when established paths facilitate climbing”.

Other than an occasional surveyor, the Adirondacks received few visitors over the next forty years. The highest peak in the region was not climbed until August 5, 1837. Ebenezer Emmons, the scientist who led the expedition, named it Mount Marcy in honor of incumbent Governor William Learned Marcy.

William C. Redfield, one of the group, wrote of the day: “The aspect of the morning was truly splendid and delightful, and the air on the top of the mountain was cold and bracing. Around us lay scattered in irregular profusion, mountainous masses of various heights and heights, like a vast sea of ​​broken and pointed waves.

Keene Valley guide Orson “Old Mountain” Phelps traced the first trail to Marcy in 1861, “nearly four and a half decades after the Crawford Path was built to the summit of Mount Washington.”

Other than a mention of the founding of the Adirondack Mountain Club in 1922, that’s it for the Adirondacks in Isserman’s book. This is understandable because the big mountains, the ones that pose the greatest challenges, are found in the western United States, Alaska and Canada.

Still, I wish Isserman, who is a professor at Hamilton College, had found some space to recount the first ascent of Mount Colden. In 1850, Robert Clarke and Alexander Ralph reached the 4,714-foot summit by climbing the trap dam, a large gash in the northwest face. Climbing Trap Dike isn’t all that difficult (although a fall could be fatal), but the first ascent is notable in that Clarke’s description in a letter to his mother is one of the earliest written accounts of the American Mountaineering.

I also wish Isserman had mentioned John Case, an American businessman who learned alpine techniques, including rope work, in Europe and helped introduce them to the United States in the early 1900s. Case spent his summers in Keene Valley, where he died in 1983, and climbed many of the area’s cliffs, often in the company of Jim Goodwin. Case has long been credited with making the first ascent of Wallface, the highest cliff in the Adirondacks, in 1933, although recent evidence suggests there may have been an earlier ascent. He was president of the American Alpine Club from 1944 to 1946.

But these are quibbles. As Isserman notes in his preface, he couldn’t include it all: hard choices about which climbs and climbers to include or, alas, all too often, to omit.

If the eastern mountains do not figure prominently in Isserman’s story, the eastern ones do. The affluent Northeast, many of them from Ivy League schools, vacationed in Europe and brought back a passion for mountaineering and knowledge of its techniques. 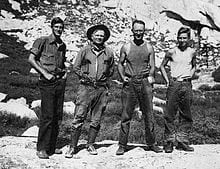 An influential Oriental was Robert LM Underhill, a Harvard philosophy professor who became the dean of American rock climbing. Underhill has made several first ascents in the Tetons of Wyoming. In one remarkable week in 1931, he laid out three new routes on Grand Teton, including the southeast ridge that now bears the name Underhill Ridge. Later that summer, he traveled to California to teach belaying and rappelling at the Sierra Club. While in California, Underhill and four of his students climbed the steep east face of Mount Whitney. It was the first technical route to the highest peak of the Lower Forty-Eight.

Underhill’s wife, Miriam, was also an accomplished mountaineer who climbed in Europe. One of the most popular climbing routes in the Italian Dolomites is Via Miriam in Torre Grande, which she climbed in 1927 with a guide. She also championed “climbing without a man.” Later in their career, the Underhills climbed numerous mountains in Idaho, Montana and Wyoming, achieving several first ascents together.

Meanwhile, residents of the western states went alone into the hills, exploring the Rockies, Sierras and Cascades as well as the Canada and Alaska Ranges. John Muir, the founder of the Sierra Club, is well known to the general public for his writings on the mountains. Equally famous for mountaineers is Fred Beckey, who grew up in Seattle and has achieved more first-time summit ascents than any other American. Beckey, now in her 90s, has come to embody the dirty lifestyle, eschewing materialism for the mountains. (He visited Northwood School in Lake Placid a few years ago to sign copies of his book Fred Beckey’s 100 Favorite North American Climbs.)

Although Isserman focuses on mountaineering, he also covers advancements in rock climbing, particularly on the great walls of the west. He devotes a few pages to the Gunks, a popular rock climbing area in upstate New York. Fritz Wiessner, who “discovered” the Gunks, appears in the book for his mountaineering and climbing exploits. Wiessner laid out a number of rocky routes in the Adirondacks, although these are not mentioned in the book. Incidentally, one of Isserman’s sources is American rock: region, rock and culture in American rock climbing by Don Mellor, teacher at Northwood School in Lake Placid.

Eventually, American mountaineers took their skills to the peaks of the Himalayas and Karakoram. Isserman recounts several famous expeditions, including three failed attempts to climb K2, the world’s second highest peak, a mountain far deadlier than Everest. Isserman ends his last full chapter with a description of the American expedition to Mount Everest in 1963. Four members of the expedition reached the summit but had to endure an open bivouac at over 28,000 feet.

Isserman credits the Everest Expedition publicity with sparking interest in mountaineering and starting a “backpacking revolution”. In an epilogue, he briefly discusses some changes since then. “The mountains will be with us forever,” he concludes. “What Americans choose to do on these mountains and think and hope atop them in the years to come is impossible to predict, except that it will surely involve a blend of tradition and innovation.”

Isserman’s story is well-written and well-researched (with 65 pages of footnotes), but when I finished it I wondered why it stopped in 1963. Granted, a lot has been accomplished since then. To give a contemporary example, what about Alex Honnold’s stunning solos on classic Yosemite climbing routes? And last winter’s free ascent of the Dawn Wall on El Capitan by Tommy Caldwell and Kevin Jorgeson? And the ascents of great mountains by climbers who travel fast and light, unlike the expeditions of yore?

A climber writes for the New York Times blames Isserman on this point, ending his review: “With all due respect, in 1964 American mountaineering was just beginning.”

Top photo: John Muir circa 1902. Bottom photo: Robert Underhill (second from right) and his three partners after climbing Mount Whitney in 1931. Both photos are from Wikipedia.